A place for all DIYers, citizen scientist and knowlege-seekers to ask, answer, share, present and just hang out

My grandfather used some tall growing cabbage, not the Jersey variety, every year to provide a bit of green.
But one or two of them he left to grwo to full height only to let them dry.
Some found a purpose as a broom stick, others as wlking sticks and one even created a simple fishing rod.

I have two problems....
1. Although I tried to pay a lot of attention as a child I simply can't remember what exactly my grandfather did to shape and preserve the stem.
2. Nature is against me LOL

For the second problem I think there is only trying again.
Last year the 10 seeds I got growing got smashed by storms, the year before it was the heat half way through the grow cycle.
And well, this years it just all drowned too many times in the rain.

I found a few nice articles on the traditional kale sticks and also on how people in the US use the tall jersey variety to make walking sticks and more.
And while the drying and sanding part is obvious, the bending and shaping part is sometimes a bit confusing.
The worst though is the finishing.
I know my grandfather did not use and varnish or clear acrylic paint.....
And his sticks still had a perfect finish after years of use, except for the normal wear and tear.
Whatever he put onto the dried stock it fully penetrated, required several applications and literally took half the summer to fully dry.
Makes me think it had to be some sort of oil like linseed oil but the stuff he had in that canister was crystal clear.
Any clue or old timer's suggestions to do it the most traditional way if next year's harvest finally works out?
Exploring the works of the old inventors, mixng them up with a modern touch.
To tinker and create means to be alive.
Bringing the long lost back means history comes alive again.
Top

Wiki has an important tip for you:
"Much of the stalk is bare; the islanders stripped leaves to accentuate this effect and induce it to grow without twisting"

About the penetrant... Hm... As it took so long to dry, it may have been some sort of oil or tallow.
But maybe it was even the oils and fats from use transfered via hand and polished by use? It is amazing how shiny a piece of surface can become if one uses it daily with bare hands...
Builder of stuff, creator of things, inventor of many and master of none.
Tinkerer by heart, archer by choice and electronics engineer by trade.
Top

I knew about the stripping but still still struggle with the forming part.
I don't mind a stick not being perfect like a broom stick as long as it is overalll "straight".
In most cases people seem to have just cut the root part into shape to form a rounded knuckle as a handle.
But some have this 180° bend with the root knot at that end.
I would like to do both but broke quite a few sticks when I tried the steam bending method - they split where the leafes were on the rings.

The gloss my grandfather created once the things were fully dry and no longer sticky or smelly.
A few minutes on the cotton buffing wheel

Unlike a varnish there was nothing ON the stick itself.
Like polished wood but quite scratch resistant and with water having no chance to do any harm.
He had one he took when walking the dog in the woods and during the wet times it was more like a ground poking stick.
despite that and all the abrasion on the lower bit the mud just wiped off or when dry already brushed off with little to no residue.
Am quite certain it had to be some clear oil but I can't find any clear ones that fully soak in and fully dry out.
One thing to note though: untreated sticks you could break rather easy when dry, the "polished" ones however you could bend almost 180° and they would still flex back without breaking or cracking....
I knew I should have paid more attention back then

Exploring the works of the old inventors, mixng them up with a modern touch.
To tinker and create means to be alive.
Bringing the long lost back means history comes alive again.
Top

... and why not letting the plant do the work?
Normally, a plant grows towards the sun...
So, purely hypothetic:
- Let the cabbage grow straight until short before the harvest (a few weeks maybe?).
- Tilt the sod 90° so the cabbage is sitting alongside the floor
- the plant will ty to right itself again. In this, it will succeed only a bit away from the root, creating a bend. A bit like in the so called "crooked forest":

So basically: dont bend a straight cabbage-stem. Let the cabbage grow into this form already.

The image i found 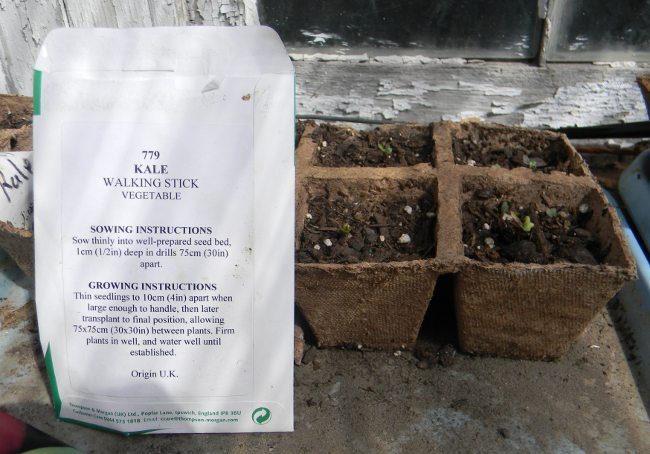 even supports this theory: "Then later transplant into final position". This could mean further apart from each other but also the orientation?
Builder of stuff, creator of things, inventor of many and master of none.
Tinkerer by heart, archer by choice and electronics engineer by trade.
Top

The guy at http://khkeeler.blogspot.com/2013/12/cu ... lking.html also puts linseed oil on... Maybe one can force the oil in a bit more if put in a sealed tube filled with the oil, set under vacuum to exrtact as much air from the stick a possible and letting the bubbles raise. Then, the vacuum is released and the basically 1 bar of pressuredifference pushes oil into the spots where air was in the wood previously... Of yource, instead of just releasing the vacuum, you also could add a bit of pressure to even further drive in the oils...
Builder of stuff, creator of things, inventor of many and master of none.
Tinkerer by heart, archer by choice and electronics engineer by trade.
Top

I thought of using some grow bags to try and make the grow with a twist.
But not sure on whether to rotate a bit once every couple of days or to do it "as required".
Either way it is too late this season.

The vacuum idea though I like and easy enough with some PVC pipe.
But would be hard with a stick that already has a formed handle.

What about wax ??
Shouldn't the trapped air in the stick mostly be driven out by the hot wax?
Once the stick has the same temp and is removed the wax should be soaked inside.
A few repeats should get it deep enough and a wax finish looks rather nice on natural "wood" I think.
Could be a bit dangerous though having such a large volume of wax if there is moisture left in the stick....
Exploring the works of the old inventors, mixng them up with a modern touch.
To tinker and create means to be alive.
Bringing the long lost back means history comes alive again.
Top

Wax would work as well i think. The process is basically to suck out the air from the wood and let it raise thru the liquid around the wood. This basically leaves the wood with an "internal vacuum" if you want to call it that. Now, if you release the vacuum in the pipe, the vacuum in the wood also wants to equalize and starts to "suck in" whatever is around the wood. If this is air, it will such in air again. It it is oil, it will suck in oil. Liquid wax around it? Will such in wax.
I know the wood doesnt really such... It the athmospheric pressure pushing on it. Thats why a vacuum is technically exactly -1 ATM of pressure.

If you do it with wax, take a wax, which really melts into a low viscosity (thin running). the 1 atmospehere difference can push only this much and if your wax is not super liquid, the penetrationdepth will propably not be very great.

What you do with heating the stick is the same, but with thermal expansion: You heat the wood. The wood itself expands less than the air. The air creates a pressure difference inside the wood against the outside. Air is pushed out (instad of pulled out by vacuum) until the pressure in the wood is the same as outside (+0 ATM). If you let it cool, the hot remaining air in the wood contracts again, and creates underpressure. You are back at the principle of the vacuum-method: You created wood with underpressure inside and it will start to suck in the outside liquid. be that air or oil or wax.

Of course, you can combine this. The higher the difference, the better:
- Heating makes air in wood expand --> Overpressure int he wood
- Putting on a vacuum outside increases the difference even more

Can Wax be mixed with oil and not separate? Maybe linseed-oil + Wax? Hm... Never tried it...

Just be save and cautious around vacuum pumps and hot wax, yes?
Builder of stuff, creator of things, inventor of many and master of none.
Tinkerer by heart, archer by choice and electronics engineer by trade.
Top

Well, I might try one or two once the hot weather is over to see if the stuff grows big enough till winter.
But when I get to the stage of finnishing them I will certainly come back to report on my failures

Exploring the works of the old inventors, mixng them up with a modern touch.
To tinker and create means to be alive.
Bringing the long lost back means history comes alive again.
Top

Bah! Stay strong and venture forth in true spirit of DIY: It is often not the endgoal which is the most important. The way to knowledge and interesting sideprojects are sometimes equally important.
Builder of stuff, creator of things, inventor of many and master of none.
Tinkerer by heart, archer by choice and electronics engineer by trade.
Top

Weather down here was just awful and seems to stay this way for a while.
Was too hot to pick my boiling plums and early in the first cooler morning the birds too care of them LOL
What I tried in greens all drowned so many times not even the tomatoes survived

Exploring the works of the old inventors, mixng them up with a modern touch.
To tinker and create means to be alive.
Bringing the long lost back means history comes alive again.
Top
Post Reply
12 posts

Users browsing this forum: No registered users and 1 guest